Do you really understand the inner workings of your PC?

When investing in a new machine, do you really understand all those initials and numbers?

To many, the inner workings of a PC is shrouded in mystery. It’s list of features appears to be written in a strange and archaic language that few understand. But help is at hand.

In this post, we’ll look at the jargon used in the world of computing so you can better understand your PC

Getting to grips with your PC’s hardware can seem pretty daunting. But, by the end of this post, you will be able to identify the different components of your PC and understand their function.

This overview will cover the System Unit, Disk Drive and Display Screen – are you ready? 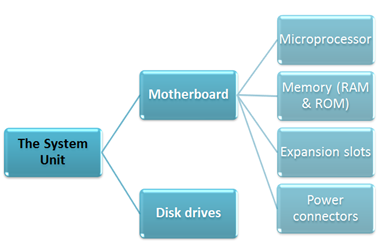 As the diagram above shows, the System Unit is made up from:

The Motherboard (also known as a system or base board) is a single printed circuit board that holds the microprocessor, memory chips (RAM & ROM), expansion slots and power connectors.

The Microprocessor is the brain of your PC. Also known as the CPU (central processing unit) it carries out commands, controls the timings of each operation and performs arithmetic calculations. The most common microprocessor manufacturers are Intel, Cyrix, AMD and Nexus. The speed of these microprocessors is measured in megahertz – the higher the number, the faster your PC.

When it comes to Memory, your PC has two types – RAM and ROM. RAM is high speed memory that the microprocessor can read from or write to for temporary storage of programs or data while in use. Unlike disk drives, any information in RAM is lost when you switch off your machine. It should therefore be considered as a work space – again, the bigger the desk (number of RAM) the more you can do.

ROM, on the other hand, holds information which was been programmed into your PC during its manufacture and can’t be altered.

Expansion slots give you the opportunity to grow your system by adding new features such as a fax/modem, SCSI interface or sound blaster card.

The Power supply is what converts the 240v AC electricity supply to the 5v (for the circuit boards) and 12v (powers motor driven devices such as hard drives) DC power required by the PC.

There are two categories of disk drive:

The Hard Drive is fixed within the system unit and is capable of storing much more data than floppy disks. Therefore, it is essential you constantly back-up your files regularly.

In comparison a floppy disk holds less data and are considerably slower in use than hard disks. Their main advantage is their portability. However, today’s modern PCs, and especially laptops, are moving away from this media in favour of CD/DVD.

The main output device of most PCs is the display screen.

The display adapter or video card is found inside the system unit and can be an integral part of the motherboard or, more commonly, an expansion card.

The display adapter receives image data from the microprocessor and stores the information in video RAM – a special form of RAM usually located on the video card. A special video chip scans this data and converts it to a digital image. This digital image is then converted to a form that can be displayed using the monitor.

So there you go – your PC’s internal workings in a nutshell.