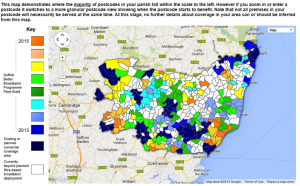 It is expected that, by 2015, all premises in Suffolk will have at least 2Mbps with 90% being served by fibre and 85% getting over 24Mbps.

It’s all well and good reading about the promises, but when will you actually get this new faster broadband service?

To find out, head over to our website and take a look at the broadband internet providers page and click on the Better Broadband for Suffolk logo. This will take you to their website where you can find what progress is happening in your area of Suffolk.

Once on the site, at the bottom of the page click on “Click to show coverage in your area” and you’ll be shown a map indicating when Better Broadband is due to arrive in your area. The dates shown are an approximation of the roll out timetable so may change.

To get started all you have to do is enter your post code.

Following on from our last update on the progress of Suffolk’s Better Broadband campaign, we just had to bring  you this latest news.

According to the East Anglian Daily Times, Suffolk has been given nearly £5million to extend its broadband coverage to more of the county.

The funding has come from the Government’s Superfast Extension Programme, which is designed to give 95% of the UK access to superfast broadband by 2017.

Suffolk County Council leader Mark Bee is reported to have said: “We are only half a year into the delivery of the Better Broadband for Suffolk programme and we’re already looking at how we can take it to the next level.

“Our current commitment to making superfast speeds available to 85% of Suffolk homes and businesses is only the beginning. We want to push forward so that even more people are able to benefit.”

We’ll keep you posted of any further developments.

Over the months, we have reported on what’s happening with Suffolk’s bid to get faster broadband.

But what exactly is FTTC and FTTP?

Well, they are the 2 different ways in which your broadband can be delivered from the exchange: fibre to cabinet (FTTC) and fibre to premises (FTTP).

The investment will help Suffolk’s economy and enabling businesses to work more effectively in new ways with its customers.

Back in August was the last time we brought you the latest news on Suffolk’s faster broadband progress, so we thought it about time we updated you.

The map below gives you a visual idea of when you can expect faster broadband in your area of Suffolk. 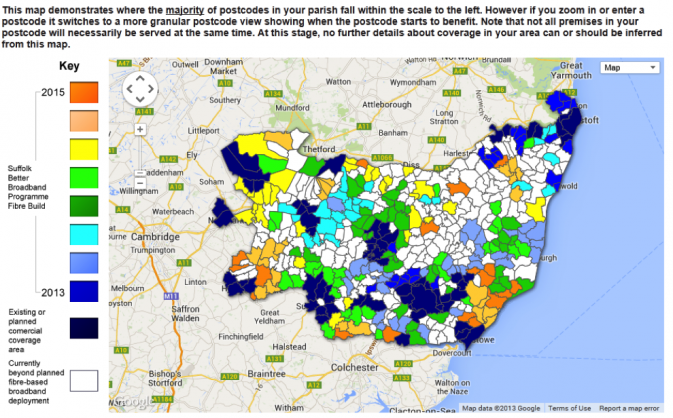 If you go to the Better Broadband for Suffolk website, you can enter your postcode to find out what is available to you.

The map shows the approximate roll out timetable, but of course, is subject to change.

The most alarming thing on the map is the amount of white – areas beyond the current planned fibre based broadband roll out. Considering the number of businesses we have in this part of the world, it’s sad to see the county will still have gaping holes in its faster broadband provision. The only glimmer of hope is that, again, its subject to change, so fingers crossed.

According to Better Broadband for Suffolk, they are ahead of schedule in their works towards achieving 90% fibre coverage by 2015.

We’ll keep you updated on their progress.

We’ve posted several times about the proposed faster broadband coverage for Suffolk, so we though it about time we brought you the latest update.

As part of a multi million pound partnership between Suffolk County Council, BT and the Government, more than 2,500 homes and businesses in 16 locations will be getting super-fast broadband speeds by the end of September.

Latest reports are that some properties in parts of Lowestoft, Belstead, Kesgrave, Hadleigh, Whatfield, Bury St Edmunds, Stowmarket, Sudbury, Felixstowe and those near Manningtree will benefit early.

The new technology provides download speeds of up to 80Mps2 and upload speeds of up to 20Mps2. All of this means businesses will be able to run multiple applications at the same time, receive large amounts of data faster and enjoy higher quality video conferencing.

In an interview with Heart, Ed Vaizey, communications minister said:

“Suffolk, along with the rest of the UK, is undergoing a remarkable transformation of Broadband and it’s fantastic to hear that the first 16 locations in the county will have access to superfast speeds by the end of September, three months ahead of schedule. With around 10,000 Suffolk homes and businesses due to benefit from superfast availability by the end of 2013, this project will provide a huge boost to the local economy and be instrumental in driving growth.”

All positive stuff then. We’ll bring you more news as and when it happens.

It’s always the rural areas that miss out. But the Better Broadband for Suffolk Programme, run by Suffolk County Council, has secured around £24m of public money (SCC and Central Government) to leverage further private sector investment from BT through a public procurement process.

By the time the programme is completed in 2015, 90% of Suffolk premises will be served by fibre optic based broadband (as opposed to the old copper lines), with the remaining 10% receiving varying speeds of between 2Mbps and 24Mbps.

It is expected that the programme will result in:

To find out when BT Openreach will be updating in your area, go to http://www.betterbroadbandsuffolk.com and enter your postcode into the ‘My Location’ box.

Each coloured square on the left hand side of the map equates to about 2 months, giving you a rough idea when your area will be upgraded. 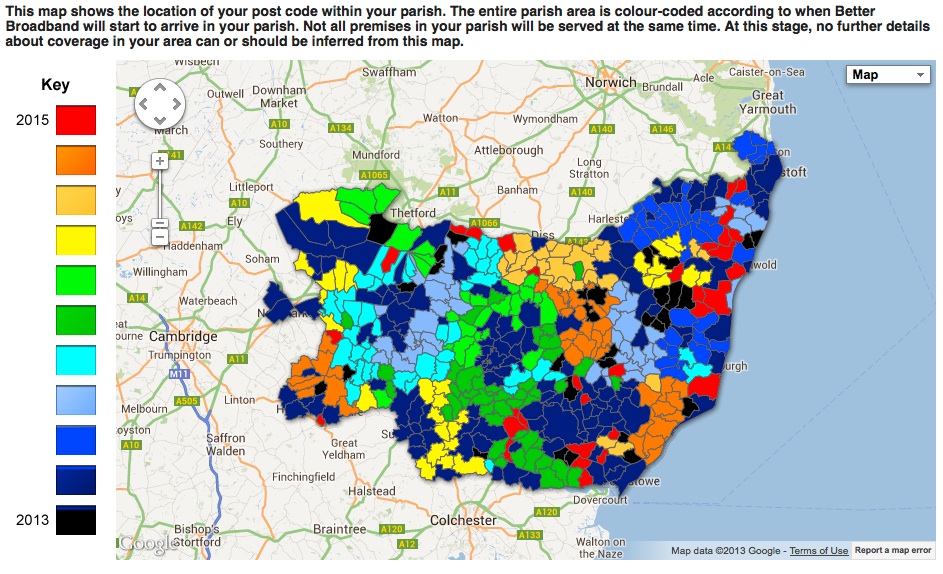 For more information, to discuss your broadband needs, or for an alternative quote, contact MPMIT.

If you’ve been following this blog, you would have seen some earlier posts about the Better Broadband for Suffolk campaign:

Better Broadband for Suffolk – Could it Really be Happening?

They have announced that they are very happy to be working jointly with BT to deliver much needed broadband improvements for Suffolk.

Key to this programme is embedding the usage of superfast broadband within the business community and sharing learning about the opportunities it unlocks in terms of incremental productivity, efficiencies, improved marketing and even completely new business models.

To that end, the Suffolk Better Broadband Programme are sponsoring the East Anglian Daily Times “Broadband Business” award, aiming to recognise business models, projects and initiatives that have improved business performance through the use of better broadband, increased bandwidth and associated broadband technology.

The award is open to businesses, including social enterprises that are able to demonstrate an approach that has made use of better broadband to support improved access to services, customers, suppliers or any other business improvement.

Fantastic – looks as though Suffolk is going Superfast!

We’ll bring you more updates as we get them.

A while ago we wrote about the latest update in the Better Broadband for Suffolk campaign. Well, now there’s more news.

A recent email from the campaign has announced that:

Suffolk County Council has today announced that it will work with BT to implement the county’s Better Broadband for Suffolk programme.

Every household and business premises in Suffolk will now be guaranteed broadband speeds of at least 2 megabits per second (Mbps) by 2015 with 85% being able to access superfast coverage.

It means that within just three years, 9 out of 10 Suffolk properties will be connected to fibre-based broadband and will be able to get speed increases of at least 10Mbps.

Obviously, this announcement has been welcomed with open arms. As Mark Bee, Leader of Suffolk County Council said “Improving access to broadband is going to help Suffolk’s economy grow by as much as 20% and create up to 5000 new jobs. There’s a digital divide between Suffolk and the rest of the country but an even more acute disparity between urban and rural Suffolk. The Better Broadband programme is going to close those gaps, boost school attainment and help the public sector to deliver services more efficiently and cheaply.”

Well, a contract between Suffolk County Council and BT is expected to be finalised and finally awarded by the end of October 2012.

This is fantastic news for Suffolk and we’ll keep you posted on further developments as and when we hear about them.

A while a go, we wrote about the continuing campaign to get better broadband for Suffolk.

Well, here’s an update for you as reported by EADT24:

SUFFOLK’S MPs gave the proposals to bring in superfast broadband to rural parts of the county a ringing endorsement during a special briefing at Westminster yesterday.

All the MPs welcomed the fact that the council was near to choosing which of two providers – believed to be BT and Fujitsu – would carry on the work.

And they were looking forward to the day when work would start on breaking down the “digital divide” that has built up in Suffolk over recent years.

While households in Ipswich and part of Felixstowe can get speeds of up to 120 Mbps through Virgin fibre-optic cables, properties in some rural parts of the county struggle to get 1Mbps.

Central Suffolk and North Ipswich MP Dr Dan Poulter has constituents on both sides of the digital divide.

He said: “The news about how far we have come is excellent and it is right to note the work that has been put in by the county council, the LEP and the FSB.

“It is great that we are one of the first four areas of the country to take this major step forward.”

Waveney MP Peter Aldous said it was good news that rural areas would be among the first reached, but work would also continue to improve services to enterprise zones which was vital for boosting business.

Mr Bee said communities with some of the slowest broadband speeds in Suffolk would be among the first to have work completed.

The first properties to be linked up should be at the end of this year with the first programme completed by the spring of 2015.

Ultimately the aim was to bring superfast broadband to all properties in Suffolk by 2020.

They report that, according to figures from the Federation of Small Business, 63% of firms (from a survey of 3,000 small businesses) in rural areas are dissatisfied with the speed of their broadband connection. That’s in direct contrast to 48% in urban areas.

Despite the Government’s pledge to create 10 ‘super-connected’ cities by 2015, the FSB believes that they are not going far enough to help rural businesses. In fact, this will have the effect of widening the gap.

The FSB are calling for a rollout of 20 Mbps superfast broadband to 98% of rural communities and businesses to help ‘close the digital divide between urban and rural businesses.’