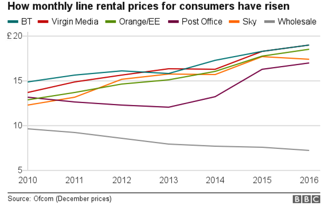 According to a recent report from the BBC, customers who only buy landline services from BT are set to get at least £5 a month taken off their bills under plans set out by the telecoms regulator, Ofcom.

Finally, some good news for consumers. It said those customers, who are often elderly or vulnerable, were not getting value for money.

Ofcom has set out this new plan because it believes some customers, who are often elderly or vulnerable, were not getting value for money.

BT has nearly 80% of the UK landline market, and Ofcom is hoping other providers will also cut prices.

“Unlike other companies, [we] have many customers on special tariffs for socially excluded or vulnerable customers,” BT said.

“Recently, we have frozen the cost of line rental for all of our customers who take a BT phone line.”

Ofcom has the power to set prices for firms that have significant market power.

“We believe there are about two million elderly and vulnerable [BT customers] – strikingly about half are in their late seventies – and for this group of people, their landline is their lifeline.

“It’s a group of people who have seen the cost of their landline bills rise by about a third in recent years, while BT’s costs have fallen by about a quarter.”

BT is not alone in this with the other main industry players increasing line rental prices by between 25% and 49% in real terms between December 2009 and December 2016, while wholesale prices fell by about 26%.

Richard Neudegg, head of regulation at price comparison website Uswitch, said that the group of consumers affected are:

“The most reliant on voice-only services and least likely to leave BT for a better deal”.

“The demographic tend not to be online, and are the least likely to engage with the market and switch their services, and it is right Ofcom is looking closely at what can be done,” he said.

Andrew Ferguson of broadband comparison website Think Broadband said that while the cost reduction would be welcome for landline-only customers, “a lot hinges on whether those who buy bundles will just end up subsidising those who buy standalone products”.