SMS Phishing is fast becoming one of the most common forms of threat – even more so than fake apps.

You might think that in the scale of things, SMS scams as a cyber threat is a bit old school, but that’s what makes them so darn clever. You are constantly reminded about looking out for fake apps, dodgy emails and unsecured websites but what happens if you get a text telling you you’ve won a product?

The chances are because it’s not an email, you would be drawn in. The fake URL contained within the message proves too tempting, and you click – after all, what harm could it do? It’s only a text.

The problem is that one click will unleash malware on your smartphone.

Don’t get caught out

It pays to be vigilant whether using your PC, tablet or phone. To help you stay safe here are a few things to watch out for, courtesy of BullGuard:

To be on the safe side, here at MPM we recommend you protect your devices with a product like BullGuard (others are available).

Above all, stay vigilant and stay safe. 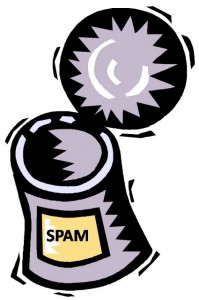 Spam is an every day occurrence.

The fraudsters spend a lot of time honing their craft, developing devious spam messages that can trick even the toughest of spam filters.

They prey on the innocent, gullible, tired and those feeling every so slightly under the weather who aren’t concentrating as much as they should.

Once the word has got out about their latest scam, they devise even more cunning messages to try and trick even the most vigilant user to fall into their trap.

You probably think you’re pretty good at spotting any that slip through your filters. In fact, you probably wonder how on earth anyone actually falls for their lame attempts at masquerading as HMRC, or whatever other guise they take.

But, for the spammers to continue in their quest, it has to be worth their while.

With figures like that spamming is unlikely to go away, which is why it’s important you remain vigilant when checking your email.

Anything that promises cheap items, get-rich-quick schemes or dodgy pictures is going to be spam. It’s easy to lose concentration when you’re tired or feeling under the weather, but don’t let that cloud your judgement. Remember, if it sounds too good to be true it probably is.